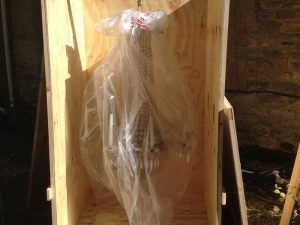 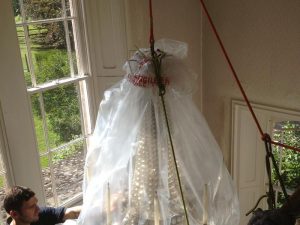 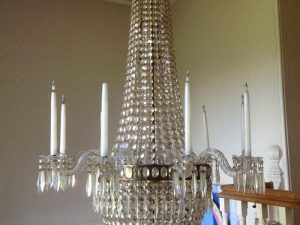 Our client had a large and very delicate chandelier that she needed cleaned and restored so naturally she called House & Carriage to do the job…..
The piece needed lowering from a six metre high ceiling, preparing for transit and shipping from the Cotswolds down to London for cleaning and restoration. It had been installed about 70 years previously and had not been moved since. A delicate operation to say the least!

The House and Carriage Approach

As the chandelier had been installed so long ago we needed to take a softly-softly approach so that we didn’t copy scenes reminiscent of ‘Only Fools and Horses’.
Even simple chandeliers need to be handled with extreme care – this one was a nine-arm specimen with an elaborate tent and bag and multiple drops off every arm. A really stunning piece and certainly something that needed to be handled with kid gloves.
We would need to undertake a thorough examination of the light and its fixings, come up with a safe method of removal and build a specialist crate for transport.

Our first task was to investigate the ceiling to make sure that any change in load or increase in weight wouldn’t bring the whole ceiling down on our heads. We then checked the existing electrical connections and disabled the power feed before performing a detailed condition report including photographs of the whole chandelier and all fittings and fixtures. All good so far and we hadn’t even laid a finger on the light itself.
Measurements were taken and a bespoke travel crate was made so that the chandelier would be suspended in the crate and not need to be dismantled during transit
The final planning stage involved rigging diagrams being draw up and a method of work discussed so that everyone involved knew exactly what was going to happen.
The removing and crating was simplicity itself. Firstly we needed to completely enclose the chandelier in a large bag in case any parts dropped off in the moving. Using a system of ropes and pulleys the light was gently lowered from the ceiling to within inches of the floor. We then stopped all operations, did a final check of the light and all its component parts before unhooking from the ropes and transferring to its travel crate. The front was screwed onto the crate then foam beans poured into the void to add further support to the structure. The top was secured in place and the piece was ready to begin the next leg of its journey.